Michael Weitzman is a Financial Planner at David S. Reinders, Inc. He joined the company in 2011. Prior to that time, he worked in the entertainment industry for 39 years and has been involved in Financial Stewardship since the 1980s. He became a volunteer with Larry Burkett’s Christian Financial Concepts in 1989, studying stewardship and financial budgeting. He continued his studies with Howard Dayton’s Compass Ministries from its inception in 1994. In 2001, he began leading financial bible studies at his church and then taught leaders of other churches to lead the study. In 2005, Michael began teaching financial seminars throughout Southern California. He also teaches financial budgeting and one-on-one financial coaching.

Michael has been married to his wife, Iris, since 1973. They have six children and twelve grandchildren.

Michael and Iris have been members of The Church on the Way both in Van Nuys and Santa Clarita, now CROSSPOINT, since 1996 and are part of the servant’s council. Michael has also served as a member of the Church Council. Both Michael and Iris have had the opportunity to teach Singles, Pre-Married, New Married and Parenting classes. They continue to stay active with their church and other ministries. 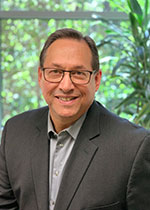